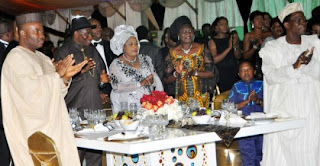 It was so hush hush I almost missed it..lol…but was able to get some info to share. Nollywood stars met with President Jonathan yesterday Saturday March 2nd at the State House in Marina, Lagos. The president hosted a presidential dinner to celebrate Nollywood at 20. First Lady Patience Jonathan, Abia, Akwa Ibom, Anambra State governors and lots of important people were at the dinner. (Above are actors Chidi Mokeme and Chika Ike at the dinner). 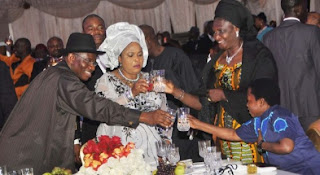 Here’s what I was able to gather from the event. Guests arrived at TBS from where they were conveyed to the State house in a coastal bus. Cocktail started at 5-6:30pm. Main dinner started at 8pm. All the important people in Nollywood were at the event – Genevieve Nnaji, Chidi Mokeme, Aki and Paw Paw, Olu and Joke Jacobs, Segun Arinze, Stephanie Linus, Patience Ozokwor, Zack Orji, Madam Kofo, Desmond Elliot, Chiwetalu Agu, Cynthia Amadi, Amaka Igwe, Dickson Iroegbu, Zeb and Chico Ejiro, Kunle Afolayan, Tunde Kelani, Andy Chukwu and several others.

President Jonathan unveiled a pictorial book titled ‘Icons of Nollywood’ – and he promised to pump N3 billion into Nollywood in order to empower the industry. Governor Godswill Akpabio of Akwa Ibom promised to finance a N50million ‘Goodluck Jonathan Prize Award’ which will be shared by the best Nollywood actor, actress, film maker and other award categories. 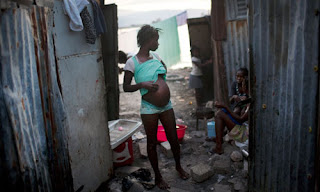 A middle-aged pregnant woman, Mrs. Lateefat Odediran, was last Saturday allegedly beaten to death by the husband of one of her friends at Ibala area of Ede, Osun State. It was gathered that the deceased who had eight months pregnancy had a quarrel with one of her friends and neighbour identified as Tawakalitu Musibau and the quarrel degenerated into exchange of fisticuff.
We was reliably informed that Mrs. Odediran was given the beating of her life by Mrs. Musibau who was later joined by her husband who allegedly used sharp objects to beat the woman to the point of death. The incident threw the entire Ibala area of the town into mourning and efforts by residents of the area to get the man arrested proved a*ortive as he fled immediately Mrs. Odediran gave up the ghost.
However, it was gathered that Mrs. Musibau who had issues with the deceased had been arrested by the police in Ede and efforts were on by the police to arrest the fleeing suspect. Also, the police are currently on the trail of some residents of the area who could be traced to the untimely death of the woman.
It was reliably gathered that an argument had earlier ensued between the deceased and Mrs. Musibau, which degenerated into a crisis. Details of what led to the argument between the two friends could not be ascertained as at the time of filing this report but it was gathered that domestic issues could have been the cause of the argument.
The Police Public Relations Officer for the state command of the Nigeria Police, Mrs. Folashade Odoro, who confirmed the incident said the police were still investigating the matter. 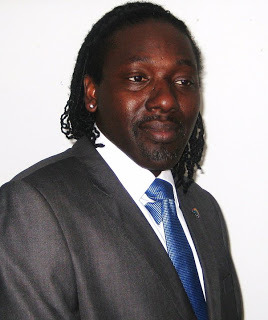 Despite the Federal Government’s intolerance for Gay activities in Nigeria, Reverend Jide Macaulay, has damned all consequences and reopened his gay church, House of Rainbow in Lagos.
The primary vision of the gay church is to reach out to sexual minorities in Nigeria, UK, and around the world.
Rev Rowland Jide Macaulay is a confirmed and ordained Pastor who founded the House Of Rainbow Church in 2006. He openly held Sunday services in a Lagos hotel hall decked out with rainbow flags until the public revolted against the church.
He then fled to the UK after death threats.
Read Pastor Jide’s views on homo-sexuality below.
For me I have always been gay and I never became gay.

I became aware of my same sex attraction whilst living in Nigeria at the age of seven. Boys flirt with each other unknowing all the time and it was at this stage that I was more aware of my emotional, physical, mental and sexual attraction to boys.

I was 14 when I had my first sex with a guy, it was filled with curiosity, passion, embarrassment and guilt as will with any heterosexual having sex for the first time.
By this age I had become a youth leader in the church and had spent time reading the bible including discovering chapters that “condemned” homosexuality.
Imagine the furore of my life? Now I have to be discrete, secretive and live a lie. When I look back at my life it never stopped my same sex attractions.
Fast forward thirty years, I am now fully confident that being gay is my natural being and I regretted ever trying to be straight.
I regretted that I did not get the education and appropriate spiritual development to be a gay man. I can understand that and that is why I am determined that the short life I may live in this world I trust God for the development of inclusive Christian education to enable the freedom of the mind, body, soul and spirit.
Recently, my father asked me to prove that homosexuality is genetics. I just looked at him and pointed to myself, “ME” you made me, you gave birth to a homosexual boy he was anxious to know more, so I asked him to prove to me that God is real, not that I don’t know but if we were to play “doubting Thomas”, lets lay all the cards out.
My homosexuality is real, I am gay and I did not become gay, just like I am black and I did not become black. This is a great way to move forward in life and let the world know that they may hate us but God Adores Us.
House Of Rainbow Fellowship is an inclusive Christian community, that welcomes all people and does not discriminate against LGBTI people (of faith or no faith).
I am proud that the Holy Spirit has led me to start this group, (nearly five years). We are growing with passion and relevance and it is my hope that we would be able to advance the learning and inclusion of all people.
I love myself and it is my daily prayer and hope that millions of LGBTI people around the world, their friends and families will come to understand and love them. 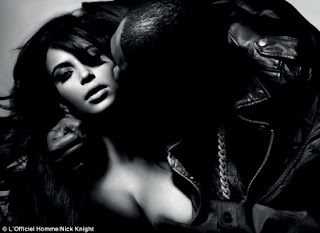 Do You Think Fashola was right to ban Okadas through the new Traffic Law?